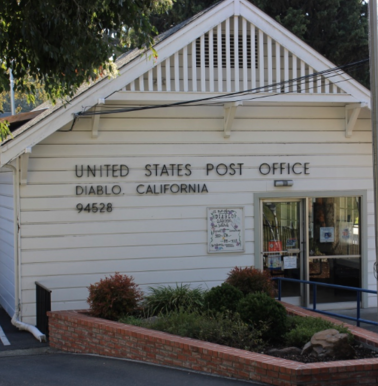 Diablo was settled in the early 1900s as a community of summer homes.  By the end of the 1940s many residents were living in Diablo full-time and demanded infrastructure like a sewer system and paved roads.

In March 1951, the Diablo Public Utility District (DPUD) was formed for the express purpose of having in place a secure government entity which could collect taxes and fees to provide infrastructure. Sometime in the early 1950s, the DPUD issued two bonds.  The first was for the complete rebuilding of Diablo roads and the second was to fund the annexation of Diablo to the Central Contra Costa Sanitary District.  After the bonds were paid, the properties in Diablo continued to be assessed a small amount to continue with the maintenance of Diablo roads.

would be beneficial.  The DPUD did not have the authority under California

law to provide police protection to the community but a Special Service District did.  So, in September 1969, the DPUD Board members with the approval of the Contra Costa County Board of Supervisors and a vote of the Diablo residents established the Diablo Community Services District (DCSD) to replace the DPUD.  The newly formed DCSD was granted powers as a California Independent Special District to maintain roads, install street lighting, provide security to its residents and guests, and maintain the equestrian trail between Alameda Diablo and Mt Diablo Scenic. The DCSD is governed by five directors, elected to staggered four-year terms by the residents of Diablo.